Nervous System Training 101: The Creation of Superhuman Strength and Athleticism

Inside of each of us lies an untapped giant, capable of superhuman strength and performance. Consider the following: pound for pound apes have double the strength of a human being.

They can also jump about 30-40% higher than top human jumpers, in addition to their superhuman leg power.

How is this possible given their similar amount of muscle mass?

Aside from longer, denser fibers, our simian friends also have an interesting piece of their brain and spinal cord that allows them stronger muscle contractions: less grey matter.

Having less grey matter (responsible for better motor control in humans, such as the ability to paint a painting or play guitar) allows apes to direct extremely powerful neural signals to their muscles, and thus allows their strength to be expressed.

What this anecdote goes to show is that a muscle is only as powerful as the signal sent to it from the brain.

This means that we are only as powerful as our brains allow us to be.

This goes, not only for squat 1-rep maxes, but also feats of muscular endurance.

In running a race such as a 400m dash, the brain has to organize which muscle fibers will contract, drop out, and contract again through the course of the race to achieve the greatest performance. There is a particular organization of muscle contraction that will allow for the highest performance in a specific event.

Aside from being a cool fact, this is also a really big reason why training endurance in one mode (say using squats, or the Olympic lifts for endurance training) doesn’t transfer that well to the endurance in things like swimming a 200m freestyle, or running a 400m dash. The nervous system has its own distinct program for each type of muscle endurance feat.

The central nervous system can create high-powered, and yet skillful movements in athletes, but it will only do so as long as it considers the movement safe. When the brain senses damage, or injury may occur to the body, it will down-regulate power to the muscle. What things will shut down the rapid wiring of power to muscles?

Let’s discuss these in more detail.

Instability in joints due to lack of proper muscle firing patterns is a red flag for the nervous system to produce force. Why would the body send full power to any joint when that joint is unstable?

This is a guaranteed recipe for injury, and the body will never allow it. Common areas for instability are the spine, and (especially for many athletes who do a lot of weightlifting) the feet. Instability of the spine will hurt things like lifting and throwing, and instability of the feet will hurt jumping and sprinting.

Lack of overloading high intensity muscle contractions makes it difficult for the body to “learn” how to produce massive forces. The only way to get fast and powerful is to specifically, and maximally practice those movements you wish to be better in.

By doing tons of excess conditioning, featuring less forceful strength and power movements, you’ll find it difficult to create power when you truly need it. If you are looking to lift heavy weights, at some point you must subject yourself to either very heavy, or very fast loads, and preferably a combination of both (more on this in a bit).

When it comes to specific movements, such as learning to sprint faster, it is really important to train at full speed frequently, and to do so in a manner that forces the body to come up with a new brain pattern, such as overspeed or “plyosoidal” training (again, more on this in a bit).

A weak mentality to training is an issue that could take volumes of books to properly describe, but let’s try and keep it as simple as possible. People’s beliefs and attitudes towards things like training, competition, and life in general filter into each and every training repetition and exercise that they perform.

An athlete who has the mentality that “they are a failure”, or “they really aren’t that strong”, or “they won’t be able to accomplish their goals”, has already made this true in their mind, and their nervous system will gladly grant them their wish by down-regulating power to the muscles.

With all that said, we’ll get into four quick main points that will help you get more out of your nervous system:

A whole book (or several) could be written about the idea of overloading the specific movements you are trying to improve in, but here is the key idea: The brain will generally wire movements towards efficiency rather than proficiency if allowed to do so.

What this means is that if the brain has to pick between power or endurance, it’ll pick endurance. By failing to perform enough specific, high velocity movement, athletes will never break the plateau that is holding them back. How do we break through the plateau? Simple, we need to train specifically more often, and then overload that specificity.

Here are some examples of some common movements athletes wish to improve, and their respective specific overloads:

Piggybacking off of point #1, in order to improve the power and efficiency of the nervous system, you must train with very high velocity contractions.

The answer is, by a wide margin, a vertical jump. The biggest difference between the two is that the jump has a higher peak contraction, and the squat sustains a lower level contraction over a longer period of time.

Simply put, the movements that create the highest recruitment of muscle motor units are those of a high velocity nature.

In order to hit bigger lifts, and get more athletic in the process, high velocity barbell training is an important concept. Many lifters have ingrained in themselves a “speed limit” due to the high amount of slower, grinding lifts they perform. In order to break this, a time period focused around high velocity lifting is generally recommended.

Try moving lightning fast on every weight room repetition for several months, and see the results, not only in your lifting, but also your athletic performance.

Below is an example of a lift I’ll commonly use with athletes to improve their squat strength, acceleration, and vertical jump in a short time frame.

A final note here; it has often been said that the most impressive squats actually come from Olympic lifters (no belt or wraps, high bar squats). Remember that Olympic lifters are constantly catching barbells at high speed in the bottom of their squat position.

Powerlifters will perform high speed work in the form of dynamic effort, but the impulse and magnitude of this type of work isn’t as high as catching a few hundred pounds in the bucket a thousand times per month.

Nervous System Training #3: Connect the Body and Allow the CNS to Wire More Power to Muscles

“You can’t fire a cannon out of a canoe” is a very popular manta for those coaches who propose better training of “the core”. Unfortunately, much of “the core” training out there is really watered down, and too low intensity to accomplish much in terms of building a better spinal support structure.

The best exercises to do to get more connected are of the crawling, crouching, carrying and gymnastic realm. You can read about how my friend Roger Nelson uses circuits featuring these movements to dramatically improve the lifting strength, and athletic output of his clients.

There have been strong case studies of powerlifters adding 20-30lbs on their deadlift in a short time period from spending 10 minutes of slow cross-crawls each day to connect their trunk and spine.

Bottom line, be a capable athlete through your trunk to allow your nervous system to wire maximal power to muscles.

The first three ideas I gave on training the nervous system were nice, practical ideas, but this last concept has more power in improving results than the others combined.

This final area to improve the contribution of the nervous system to human performance is found in the subconscious mind.

Improving power output is not just a physical training venture, but also a mental one. When most people think of the mental side of things like lifting weights, they usually picture someone sniffing ammonia caps and banging their head into the wall.

In reality, there are four big ways that the mind can directly influence improvement in performance:

This article will be a bit too long if we cover these in depth, but I’ll summarize this all with a quick drill for you to try at home.

Perform a standing vertical jump, and record your best mark.

Now, before you try the second time, yell as loud as you can “I am the greatest!!!”, and immediately after, perform a second jump (Hint, this only works well with athletes who take it seriously, I’ve learned from experience).

Did you jump higher? A lot higher? Maybe you even set an all-time best? OK! Now you know that on any day, your body has more (sometimes much more) to give in a particular movement.

This is just the tip of the iceberg, and a multi-lateral mental training program can make all the difference in wiring more power to your muscles, electrifying your athletic performance. 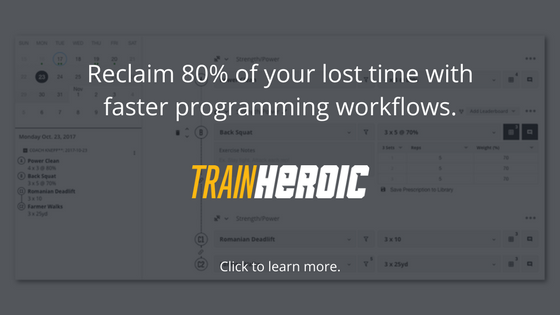 Joel Smith, MS, CSCS is a NCAA Division I Strength Coach working in the PAC12 conference. He has been a track and field jumper and javelin thrower, track coach, strength coach, personal trainer, researcher, writer and lecturer in his 8 years in the professional field. You can connect with Joel on his website.

All content copyright © TrainHeroic Made with love, sweat, and deliberate practice in Denver, CO.